MANGA IN YOUR NEWSPAPER 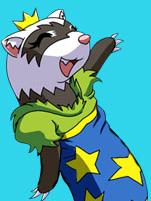 In a bid to get younger readers excited about their comic sections, many newspapers are going to begin carrying manga comic strips, specifically Peach Fuzz (about a 9-year-old girl and her imaginative ferret who misses life at the pet shop) and Van Von Hunter (which pokes fun at the cliches of fantasy-adventure).

The project is a result of a partnership between Tokyopop and Universal Press Syndicate, according to this press release:

In a bold move that marks an industry first, two powerful entertainment giants -- Tokyopop, the largest English-language publisher of manga in the world, and Universal Press Syndicate, the #1 newspaper syndicate in the world -- join forces to bring the exotic and imaginative world of manga comic strips to daily newspapers across the U.S., Canada and other countries around the globe.

Beginning January 2006, the first Sunday feature will be Peach Fuzz -- a story that explores the relationship between nine-year-old Amanda and her imaginative ferret, Peach. The second feature, Van Von Hunter, takes the protagonist through spooky castles and magical realms filled with evil stuff to slay, all the while lampooning the cliches of fantasy-adventure manga, anime and role-playing games. This event marks the first time ever that manga will appear in North American newspaper comic sections.

USA Today reports that many papers will start carrying Peach Fuzz this Sunday. Other newspapers in the U.S. are expected to follow suit with manga strips in the coming year.

Tokyopop
Universal Press Syndicate
Posted by Unknown at 7:31 AM