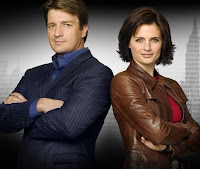 After a lengthy dry spell, character-driven mystery TV is back in a big way. For years the lone torch was largely carried by basic cable's USA Network with Monk and then the companion series Psych. But now, thanks to the success of the CBS series The Mentalist and the promise of ABC's Castle, the big networks seem to have lifted their ban on fun, banter-filled detective shows.

Castle, airing Monday nights, stars Nathan Fillion as best-selling mystery writer Richard Castle and Stana Katic as Detective Kate Beckett. The two meet when a serial killer is reenacting murders from his books -- but once the case is solved, Castle continues to pester the detective every week in the name of "research." As a result, the unlikely pair work together to probe New York City's most unusual homicides.

Television Without Pity talked to Fillion about some special guest stars in the pilot:

TWoP: You play a crime novelist on the show, and in the first episode you play poker with some of your real-life contemporaries, Stephen J. Cannell and James Patterson [and Faye Kellerman]. Did you pick their brains at all about the life of a writer?
NF: You know what, I was a little nervous meeting those guys! They had a lot of stories, and I was just sitting there and chatting with them and talking about stuff that they’ve done. Steve made most of the television that I grew up with. That’s really quite something. So he would tell me little side notes about how certain shows would run, and how different actors were, and how he came into different ideas, and that was kind of cool. But we didn’t really speak specifically about books and writing. That would have been a really good idea to do that, in retrospect.

Episode guide, character info, and free episodes online at Castle on ABC.com
The first season of Castle on DVD is already scheduled for Sep. 22.

Related links:
MONK ends with season eight
The stars shine for MONK 100
Posted by Unknown at 5:00 AM