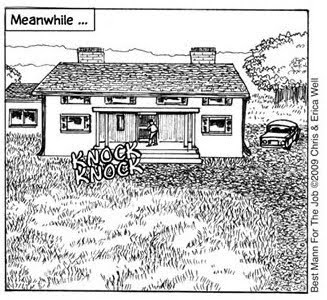 Best Mann For The Job #36 is now online at TitleTrakk.com: While the sheriff is preoccupied with a local matter, the bank robbers -- desperate, fugitives, needing medical attention -- have stopped at a farmhouse. (Nothing good can come from this.) Read the story from the beginning at StudioWell.com.

Best Mann For The Job stars Grace Mann, a woman with a complicated past who returns home to become sheriff of Hope Falls, Tennessee. This serial drama aspires to the style of the classic serial comic strips, with the crime-bustin' chops of a rural Dick Tracy, the small-town charm of Gasoline Alley, and the emotional touches of The Heart of Juliet Jones. (Or if you prefer, imagine if T.J. Hooker became the new sheriff of Mayberry.) Latest strip exclusive at TitleTrakk.com.

BEST MANN FOR THE JOB Teaser/Trailer


Previously:
Best Mann: This can only end badly
Best Mann: The cows figured out the difference
Best Mann: It's 'lectric!
Best Mann: You're that new lady sheriff aint'cha?
Vote for your favorite fictional sheriff!
Posted by Unknown at 5:00 AM