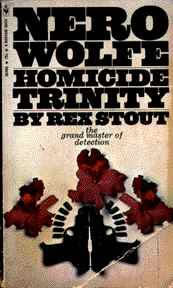 I discovered several bloggers going through the The Alphabet in Crime Fiction letter by letter, and thought it'd be fun to give it a try. This week they're featuring the letter "H."

My selection is Rex Stout's Homicide Trinity (Crime Line). Originally published by Viking Press in 1962,  it's a collection of three mysteries starring Nero Wolfe and Archie Goodwin: "Eeny Meeny Murder Mo," first published in Ellery Queen's Mystery Magazine (March 1962), "Death of a Demon," serialized in The Saturday Evening Post (June 10, 17, and 24, 1961), and "Counterfeit for Murder," serialized as "The Counterfeiter's Knife" in The Saturday Evening Post (January 14, 21, and 28, 1961).

If you've never had the pleasure of reading a Nero Wolfe/Archie Goodwin mystery, you're missing out! Rex Stout brilliantly combines the best elements of two disparate traditions in detective fiction -- the cozy whodunits and the "Black Mask" school of gumshoes. Corpulent, persnickety armchair detective Nero Wolfe has the brains to solve the puzzle, whereas righthand man Archie Goodwin has the street smarts and, when called for, the fists to get the clues. It's as if Miss Marple went into business and hired Philip Marlowe to do the legwork. Of course, Wolfe is loathe to put his mind to work, preferring to focus on his orchids and his dinner. More often than not, it's only a result of Archie's needling that they take on any work at all -- if only because they have bills to pay. And since Wolfe won't go to the case, Archie has to bring everything to Wolfe, suspects and all. Stout wrote some seventy Nero Wolfe books and stories, starting with Fer-de-Lance in 1934 and ending with A Family Affair, published shortly before the author's death in 1975.

Homicide Trinity is thirty-sixth in the series. The Wolfe Pack: The Official Nero Wolfe Society describes it thus:


On the reverse of this jacket you will find the bill of fare for this three-course feast of murder, mystification, and masterful deduction. At his large and loyal Society will attest, Rex Stout's famous threesomes are fully as delightful as his book-length novels, which is to say that they are peerless examples of mayhem de luxe.

Murder#1 "That's the gun I'm not going to shoot my husband with," said the pretty lady, handing a revolver to Archie. But her husband was already dead, shot with an identical gun ...

Murder#2 Fighting three of the smartest lawyers in the business, Nero Wolfe's own soup-stained tie becomes a deadly weapon of murder ...

Murder#3 When a cop-hating landlady gives Nero Wolfe $40,000 to make the police eat dirt, and an actor at liberty takes the liberty of killing, Archie takes matters into his own hands ...

I'd recommend nearly any title starring Nero Wolfe and Archie Goodwin. As with the best mystery series, the mysteries are often great, the stories are usually great -- and the characters are always great.

I loved the Nero Wolfe books too Chris (in fact I used Stout's GAMBIT for my 'G' post in the same meme) - Wolfe is unique among crime fighters and a great character.