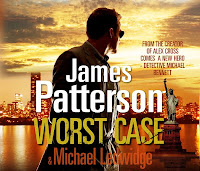 Computer Shopper reports that Sony is releasing new special edition romance- and crime-themed eBook readers in time for Christmas. The James Patterson Reader Pocket Edition comes pre-loaded with Patterson's best-selling Cross Country and selected excerpts from two upcoming James Patterson books, a free download of the new Alex Cross novel Worst Case (not due for publication until 2010), and a letter from the author, "which may or may not also be ghost written."