Coming July, my cozy mystery whodunit Nursing a Grudge will be the first in a brand-new campaign from Barbour Publishing under the banner "Hometown Mysteries." The first wave includes six authors, one title a month through the end of the year. (God willing, my second book in the series will be available January 2011.)

WHAT'S THE WORST THAT COULD HAPPEN?
For twenty-five years, EARL WALKER has been defined by the two worst things that ever happened to him: The death of his beloved wife, and the bullet that ended his career as a metro bus driver. Now bound to a wheelchair, he lives at Candlewick Retirement Center ... where he barely knows the neighbors. Not that it matters: Following a failed state inspection, residents have 30 days to get out.

When he's dragged from his assisted-living apartment to a clandestine spicy hot chili party, he almost has fun ... until someone ends up dead. Now Earl's the only one suspicious of the way the partygoer met his demise. Can he solve the puzzle—and figure out his relationship with his new lady friend—before Candlewick is closed down and the suspects move away?

TV Guide talks with crime fiction legend Elmore Leonard about FX series Justified, featuring his character U.S. Marshal Raylan Givens. "When he delivered the lines, the ones that I wrote, they were just the way I heard them when I wrote them," Leonard says of series star Timothy Olyphant. "That doesn't happen very much. They're sticking right to my sound, and I think it's really good." Link: Elmore Leonard: Justified Gets It Just Right

Givens has appeared in the novels Pronto and Riding the Rap and the short story "Fire in the Hole." TV Guide reports that Leonard is working on a new Givens story which could inspire plots for a potential second season. Justified airs Tuesdays at 10/9c on FX. 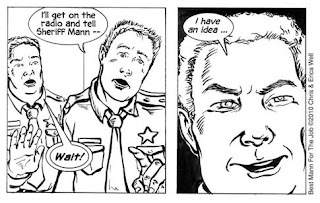 Best Mann For The Job #52 is now online at TitleTrakk.com: Deputy Baxter sees a chance to make trouble for the new sheriff.

Best Mann For The Job stars Grace Mann, a woman with a complicated past who returns home to become sheriff of Hope Falls, Tennessee. (Imagine that T.J. Hooker became the new sheriff of Mayberry.) The serial drama is created by the husband-wife team of mystery novelist Chris Well and comics veteran Erica Well.

And Janet Evanovich just keeps going: Her bounty hunter Stephanie Plum appears in her sixteenth book this summer, and soon to make the leap to the big screen.

Meanwhile, Grey's Anatomy star Katherine Heigl is dying her hair brunette for the role of Stephanie Plum in the big screen adaptation One For The Money. Read more about the project (and Heigl's hair) at Variety and Us Magazine and Yahoo! Movies.

(1981)
The Riddle of the Third Mile (Inspector Morse Mysteries)

(1989)
The Jewel That Was Ours : An Inspector Morse Mystery

(1991)
The Way Through the Woods (Inspector Morse)


A woman is shot as she waits for her train to work. An hour later, a second woman is gunned down as she rides an elevated train through the Loop. Two hours after that, a church becomes the target of a chemical weapons attack. The city of Chicago is under siege, and Michael Kelly, cynical cop turned private investigator, just happens to be on the scene when all hell breaks loose.

Kelly is initially drawn into the case by the killers themselves, then tasked by Chicago’s mayor and the FBI to hunt down the bad guys and, all things being equal, put a bullet in them. Kelly, of course, has other ideas. As he gets closer to the truth, his instincts lead him to a retired cop, a shady train company, and an unnerving link to his own past. Meanwhile, Kelly’s girlfriend, Rachel Swenson, becomes a pawn in a much larger game, while a weapon that could kill millions ticks away quietly in the very belly of the city ...

More about the author at MichaelHarveyBooks.com. Find a review of The Third Rail at Random Jottings.

Kerrie at Mysteries in Paradise has posted the latest edition of the Agatha Christie Blog Carnival, featuring 15 entries from 11 contributors. (Two of my own blog entries appear this month: "Agatha Christie meets Doctor Who" and "Agatha Christie: Partners in Crime.")

If you're a blogger and fan of Dame Agatha, it's easy enough to play along: Blog about the author, her mystery fiction (books or short stories), or her detectives (including Hercule Poirot, Miss Jane Marple, and Tommy and Tuppence Beresford). Then submit your link and description to the next edition (Apr 23) of the Agatha Christie Monthly Carnival using the carnival submission form. It's a global list of participants, so think of this as your way of contributing to world peace!

Related links:
40 Mystery Series: 1887-2008
Murderous Beginnings: 40 Detective Fiction Firsts
All Aboard For Murder: 10 Mysteries and Thrillers On Trains
Christmas Can Be Murder: 10 Seasonal Mystery Titles
The changing face of traditional mystery fiction
Posted by Unknown at 6:09 AM 2 comments:

Agatha Christie on Thrill of it All 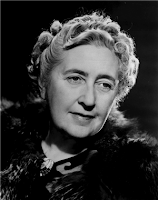 Blog entries about or that include mystery fiction legend Dame Agatha Christie (1890-1976):