Here are the results of the 2010 Edgar Awards from the Mystery Writers of America -- the winners are in bold:

The Lineup: The World's Greatest Crime Writers Tell the Inside Story of Their Greatest Detectives

by Dave Cullen (Hachette Book Group/Twelve)
Go Down Together: The True, Untold Story of Bonnie and Clyde by Jeff Guinn (Simon & Schuster)
The Fence: A Police Cover-Up Along Boston's Racial Divide by Dick Lehr (HarperCollins)
Provenance: How a Con Man and a Forger Rewrote the History of Modern Art by Laney Salisbury and Aly Sujo (Penguin Press)
Vanished Smile: The Mysterious Theft of Mona Lisa by R.A. Scotti (Alfred A. Knopf)

BEST JUVENILE
Closed for the Season

A complete list of cozy mysteries starring burglar's widow Mrs. Melita Pargeter, who takes justice into her own hands with the help of her late husband's old gang. Written by Simon Brett:

A Nice Class of Corpse

The most personal
A young mother and her infant child are ruthlessly gunned down while returning to their car in the garage of a shopping mall. There are no witnesses, and Detective Lindsay Boxer is left with only one shred of evidence: a cryptic message scrawled across the windshield in bloodred lipstick.

The most dangerous
The same night, the wife of A-list actor Marcus Dowling is woken by a cat burglar who is about to steal millions of dollars' worth of precious jewels. In just seconds there is a nearly empty safe, a lifeless body, and another mystery that throws San Francisco into hysteria.

The most exciting Women's Murder Club novel ever
Lindsay spends every waking hour working with her partner, Rich--and her desire for him threatens to tear apart both her engagement and the Women's Murder Club. Before Lindsay and her friends can piece together either case, one of the killers forces Lindsay to put her own life on the line--but is it enough to save the city? With unparalleled danger and explosive action, The 9th Judgment is James Patterson at his compelling, unstoppable best!

A complete list of mysteries starring amateur sleuth Eugenia Potter, a widow and chef who divides her time between an Arizona ranch and a small town on the Maine coast. Considered the first in the 'culinary mysteries' category.

Written by Nancy J, Pickard (based on notes by Rich):
The 27 Ingredient Chili Con Carne Murders 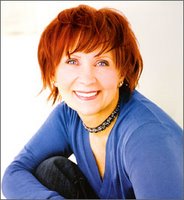 April 22 is the birthday of thriller writer Janet Evanovich! Head on over to her website to wish her a happy birthday!