An updated version of this entry can be found here: Complete NICK and NORA CHARLES by Dashiell Hammett (The Thrill of it All).
Posted by Unknown at 10:00 AM No comments: 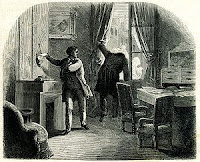 Despite appearing in a mere three short stories written by Edgar Allan Poe, C. Auguste Dupin is generally acknowledged as the first detective in fiction, and the prototype for the likes of Sherlock Holmes by Arthur Conan Doyle and Hercule Poirot by Agatha Christie. many tropes that would later become commonplace in detective fiction first appeared in Poe's stories: the eccentric but brilliant detective; the bumbling police; the first-person narration by a friend. Poe's Dupin stories also are the first where the detective announces his solution and then explains the reasoning leading to it.

details how author Poe wrote "The Mystery of Marie Roget" as an attempt to solve a real-life unsolved crime.

A selection of mystery, detective, and crime fiction titles coming to booksellers September 2010:

by Tasha Alexander
She Felt No Pain (Holly Martin Mystery)

by Lou Allin
A Cup of Jo (Maggy Thorsen Mysteries)

by Sandra Balzo
The Vaults

by Lisa Black
For Richer, For Danger (A Broken Vows Mystery)

by Rhys Bowen
A Nose for Justice

by Mary Daheim
The Hilliker Curse: My Pursuit of Women

by Joanne Fluke, Leslie Meyer, and Laura Levine
Bryant & May Off the Rails (Peculiar Crimes)

by Christopher Fowler
Bryant & May On the Loose (Peculiar Crimes)

by Christopher Fowler
In Their Footsteps

by Tess Gerritsen
The Identity Man

by Tim Kring
Comfort to the Enemy and Other Stories

(Frank Quinn #5) by John Lutz
The Fever of the Bone

by Otto Penzler
Death of a Stranger (William Monk)

by Stuart Woods
Posted by Unknown at 9:38 PM 1 comment: