(1996)
World-class gentleman felon Jack Foley is busting out of Florida's Glades Prison when he runs head on into a shotgun-wielding Karen Sisco. Suddenly he's sharing a cramped car trunk with the classy, disarmed federal marshal and the chemistry is working overtime—and as soon as she escapes, he's already missing her. But there are bad men and a major score waiting for Jack in Motown. And the next time his path crosses Karen's, chances are she's going to be there for business, not pleasure.

(1996) and When the Women Come Out to Dance, and Other Stories

(2002). Also the basis for the first episode of the short-lived 2003 Karen Sisco television series.

Posted by Unknown at 6:00 AM No comments:

The Innocence of Father Brown

(1914)
The Incredulity of Father Brown

Posted by Unknown at 6:00 AM No comments:

10 Most Popular Posts Ever

Thanks to Blogger's new stats features, I now know that these are the 10 most popular posts in the history of this blog:

Email ThisBlogThis!Share to TwitterShare to FacebookShare to Pinterest
Labels: lists

Today is the anniversary of Edgar Allan Poe's birth—and CNN reports that "the shadowy visitor" who, every year for 60 years, left roses and a half-full bottle of cognac at Poe's Baltimore grave on the writer's birthday, failed to appear the second year in a row. The tradition began Jan. 19, 1949, according to the Edgar Allan Poe Society. The last visitation came two years ago. Read the story here: Edgar Allan Poe's cognac-carrying admirer fails to materialize again

(Thanks to The Roads of Autumn Dusk for reminding me it was Poe's birthday.) 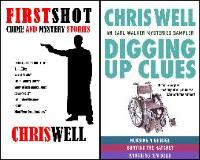 MY GIFTS TO YOU!
Get these two exclusive eBooks FREE when you sign up for my author newsletter! (I promise you'll only hear from me every few months.) Free downloads available for Kindle, Nook, iPad, Kobo, and more. Sign up now!

(1927)
The Unpleasantness at the Bellona Club

(1998) - from unfinished manuscript by Sayers
A Presumption of Death

(2002) - based on Sayers' "The Wimsey Papers"
The Attenbury Emeralds

The blog has been dark these past weeks (months) because I have been quite tied up with my day job and with writing. (The third Earl Walker mystery is scheduled to come out July this year.)

Posted by Unknown at 8:54 PM No comments: